Falaniko will sign letter of intent with South Dakota football 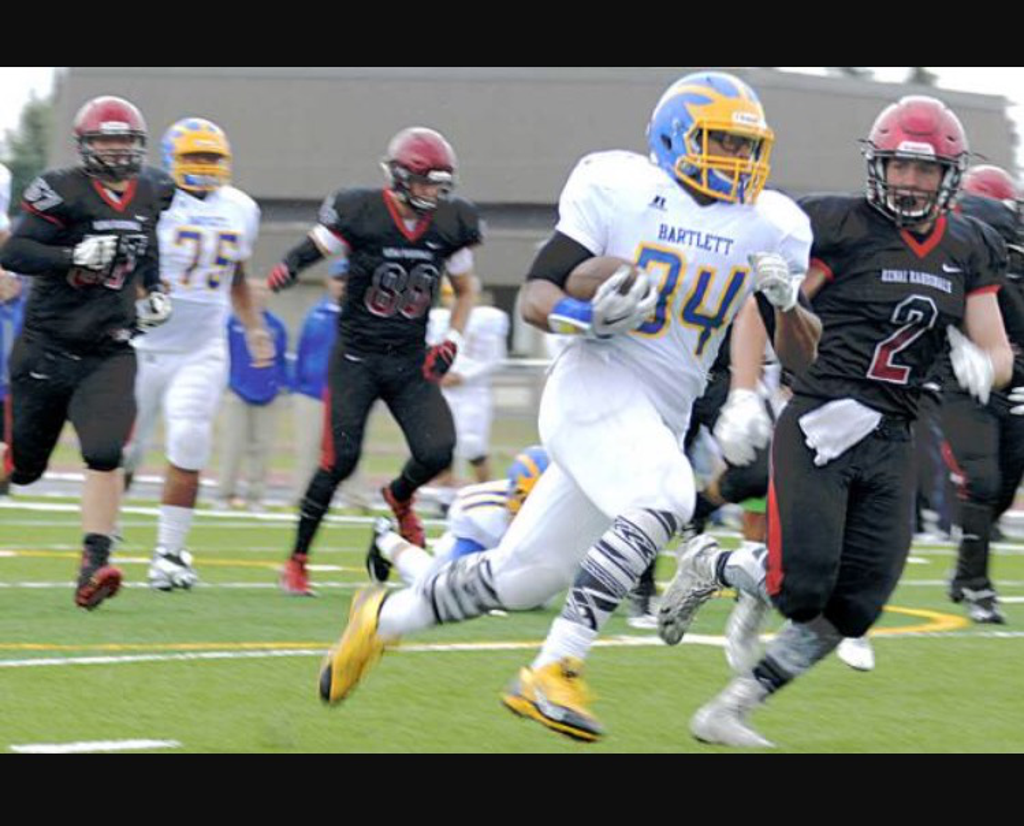 Ethan Falaniko’s player-of-the-year senior season with the Bartlett football team got him recognized by the University of South Dakota.

He hopes playing there brings attention to Alaska.

Falaniko, who turns 18 on Friday, plans soon to sign his letter of intent with South Dakota, where he looks to become Alaska’s first running back in 15 years to play at the NCAA D1 level.

The 2,000-yard rusher last night returned from his a official visit to the college campus in Vermillion, a small town that’s big on the Coyotes, a member of the Missouri Valley Conference.

“Everywhere you went you saw those bummer stickers for the University of South Dakota. It just shows how much support they get,” Falaniko told me. “The people were very kind. It was pretty much like everyone knows everyone. It was that type of environment.”

He picked South Dakota for several reasons. He has friends and family attending school in neighboring North Dakota and Iowa. His father is in the U.S. Army and is expected to get stationed at a nearby military base. He was also impressed with South Dakota’s accredited business school and football facility.

“Playing D1 football has always been my dream growing up,” Falaniko said. “But I’m also interested in business and I found out the University of South Dakota is really high on business.”

As a senior at Bartlett, the 5-foot-11, 220-pounder rushed for 2,053 yards and 33 touchdowns in 9 games as was selected Gatorade Alaska Player of the Year. Six times he scored four or five touchdowns in a game, and at one point during the season he led the nation in rushing touchdowns, according to MaxPreps.

“He just works his butt off and I think that’s something that’s going to help him at the next level,” Bartlett coach Daniel Esparza told me. “My experience with the players we’ve had go to college is that it’s not necessarily the most talented kid that’s the most successful. Most of the time it’s the kid that’s the toughest mentally and the toughest physically, and the kid that can handle and persevere and be tough.”

Falaniko is primed to become the Alaska’s first running back at a D1 college since Service’s Brandon Drumm at Colorado [1999-2002] and Chugiak’s Yohance Humphrey at Montana [1998-2001].

“Football in our state has changed,” Esparza said. “When those guys were in high school there were a number of Alaska running backs that had cracks at high-level football. We ran the football back in the day and now a lot of our schools don’t do that.”

“Not only is Ethan Falaniko an incredible player, he is also an excellent student and one of the best kids I have ever met,” Chugiak coach Roger Spackman said. “He is the most complete and impressive student athlete I can remember for many years in our state.”

He is a member of the National Honor Society, volunteers at his church and sings in the school’s swing choir.

“He represents the good side of our sport,” Esparza said. “He’s a breath of fresh air. The biggest problem with football right now is that the fans, the coaches, we put up with guys who are jerks because they are good football players and we let them get away with things because they’re good. I think he proves you could be a good person, a nice guy, and go on the field and be a gladiator.”

Falaniko looked like a warrior when he piled up a school-record 351 yards and 5 touchdowns in a 50-31 victory over Dimond in September.

“It was against a really good team,” he said. “Both teams played well. I just felt really good on that field.”

Falaniko averaged 9.9 yards per carry his senior season and broke the 200-yard mark six times. He hopes to carry that success to South Dakota and become the Alaska’s next major running back.

“Everywhere I go I play with a chip on my shoulder and I bring Alaska with me,” he said. “The idea of Alaska not getting as much exposure as other states bothers me. I want to show everybody that we can do it too.”