Soldotna defense does its part under coordinator Pomerleau

“He does a great job on that side of the ball,” Stars head coach Galen Brantley said 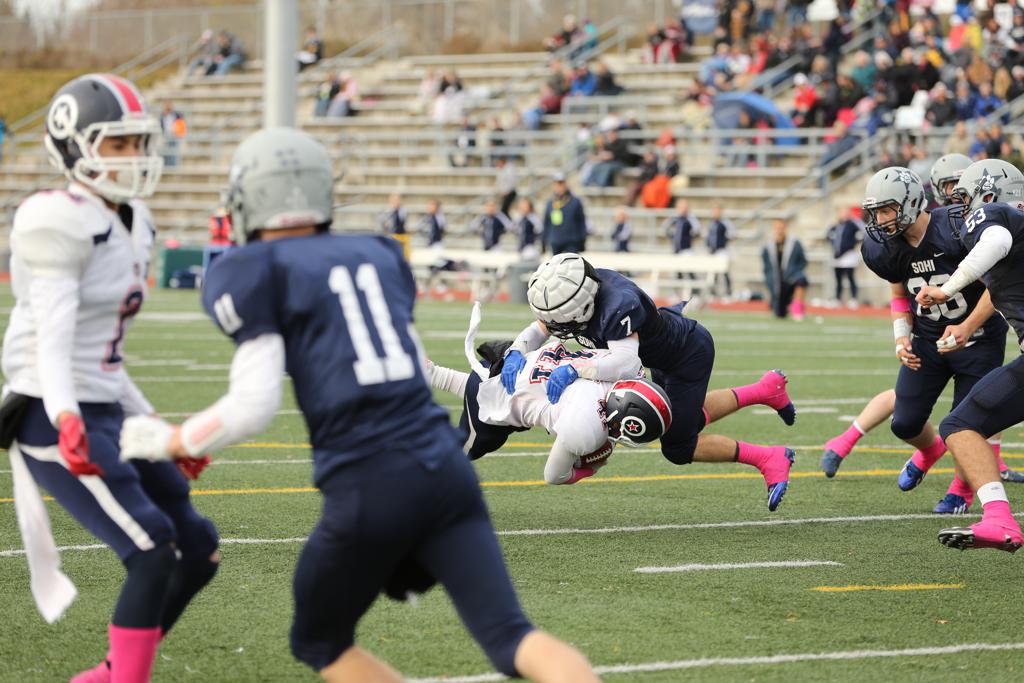 Back in the day, Galen Brantley and Eric Pomerleau were teammates on the Valley City State University football team in North Dakota.

Now they are coaching the Soldotna Stars.

Brantley, the head coach, is the offense coordinator and Pomerleau is the defensive coordinator.

Together, they make up one of the most successful coaching combos in Alaska high school football.

They have not lost in 16 games roaming on the same sideline.

This is Pomerleau’s second season with Soldotna; he used to be the head coach of Skyview, which is now closed.

Brantley is in his eighth season as head coach. He spent several years as an assistant and graduated from Soldotna.

“The nice thing is when he first came over here it’s worked since Day 1,” Brantley said. “We’re on the same page philosophically and a lot of personnel things, so it’s really been good to share the work load with another coach who is vested and wants to put the time in.”

Soldotna has posted a 100-9 record since 2005 while winning seven titles in the last nine years. The Stars are currently riding a state record 36-game winning streak.

The two coaches share many responsibilities to help make sure the winning continues.

“The reality is there is enough work to go around. It’s really a two-man job and when it comes to things defensively, he has the final say,” Brantley said. “If he needs help with something he’ll come to me, but there’s really not time to mettle in the defense when I’m trying to make adjustments.”

Plus, Pomerleau has the defense playing well this year.

The Stars are giving up an average of only 15.2 points in seven games.

“He has a lot of years of experience and does a great job on that side of the ball,” Brantley said. “About the only time he hears from me is when there is a 7- or 8-play drive and my offensive is on the sideline. Then I start gnawing on him.”

“We’ve known each other since we were kids.”

When people think of Soldotna football, they think of the precision in which the Stars run the Wing-T rushing attack. They are surgical and methodical.

They are also scoring nearly 50 points per game.

“Our offense certainly gets a lot of attention, but we spend more time on defense than we do on offense on our daily practice plans,” Brantley said. “We keep is pretty simple. If our kids are confused on that side of the ball they’re not able to run around the play fast and so it’s not real fancy but we work hard teaching our kids how to read blocks and how to get to the right places.”

Brantley doesn’t look for speed and strength in his players as much as he just wants them to be aggressive, no matter which side of the ball.

“I think our offense and defense kind of complement each other. We kind of have an aggressive, attack-style offense and we want to continue to be that way on defense,” he said. “They are really the same kind of kid. We don’t have the luxury, being smaller, to have certain kind of kids on one side of the ball and another kind of kid on the other.”

The Soldotna players come in all shapes and sizes. Over time they are molded into the same type of player.

“There are a lot of diamonds in the rough walking around that if they are just given a skill set and they are given the time to develop the confidence can learn how to play more aggressively,” Brantley said. “It’s up to them whether or not they want to put the time in and we’ve been very fortunate to have young men around that work their tails off and demand it out of each other.”