Alaska High School Boys Hoops has some great players! In honor of the 20th Anniversary of ASAA March Madness Alaska this year, and speaking with people and watching games the past few years here is the Top 20 Boys Basketball Players in Alaska list. 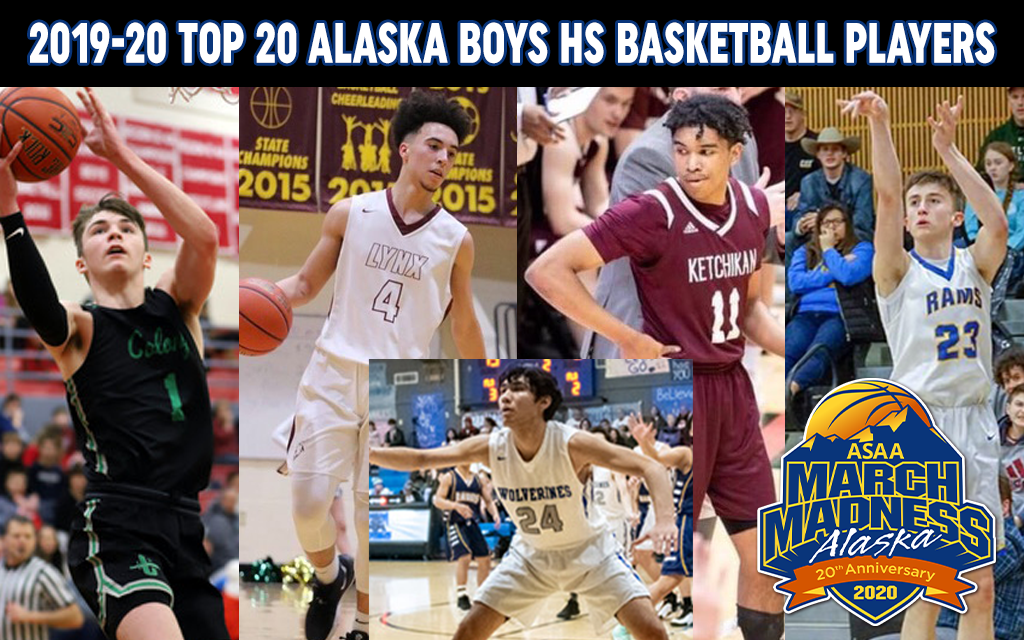 This list has been created by ArizonaJoe, a former Alaska teacher and current basketball enthusiast! After watching games and speaking with some coaches ArizonaJoe created this list. ASAA posted this article to support the kids who have worked very hard to be part of this conversation. Lists like this always spur debate about who isn't on the list. There are many student athletes that deserve to be in these types of discussions. Congrats to the students who are a part of this list, and all the students working hard during this 2019-2020 basketball season. 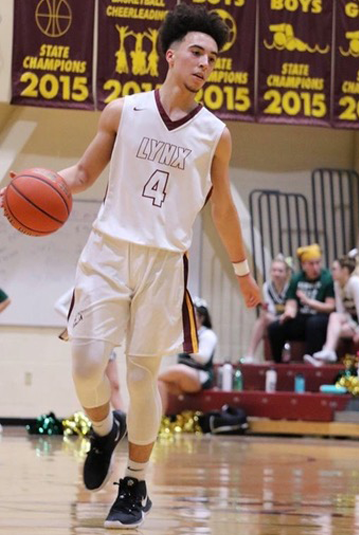 Isaiah Moses, a 6’0” senior point guard and captain for the Dimond High Lynx of Anchorage, Alaska, is leading his team as the top ranked team in Alaska this season, with a 13-1 record so far. Isaiah has been on the varsity since he was freshman, and has started the past 3 seasons. Over the previous 4 seasons Dimond has been in the 4A Alaska State Championship game each year. Moses, has been a big part of Dimond going 101-10 so far in his high school career.

Moses has averaged 29 points per game this season, with 8 assists and 7 rebounds. He currently is shooting 89% at the charity stripe. He has been named MVP of several tourneys  and  was named MVP of the Cook Inlet Conference last season. He also has been on the Alaska All-State tournament team and coaches all star teams. Last season his team won the Phoenix Arizona Cactus Jam tourney and he was named MVP. He has been nominated this year as an McDonalds All-American player. Isaiah has a great skill in seeing the court for defensive and offensive plays, and being the spark plug for his team, making things happen.  Isaiah is hoping to lead his Dimond Lynx team back for a 5th straight championship title appearance this season.

In academics, he has a 3.33 GPA this year, and is on several of his school’s student body organizations. Moses is interested in science and animal studies, and has been accepted to attend the University of Alaska Anchorage on a full ride scholarship.

In the summer, Moses played for the AAU D1 Nation Alaskan Ambassadors team which has won tournaments in Dallas, Texas and Las Vegas, Nevada the last two years. He also made those tournaments as MVP and Allstar teams. He has participated in playing and working in several  summer basketball camps in Alaska, Washington and Idaho. Isaiah comes from a very supportive family, his mother runs a child care business in Anchorage and has a younger sister who is on the Dimond gymnastics team and an older brother who played soccer at Dimond High and academy soccer in Washington state. Keep Isaiah on your radar as he promises to be an exciting player to follow. 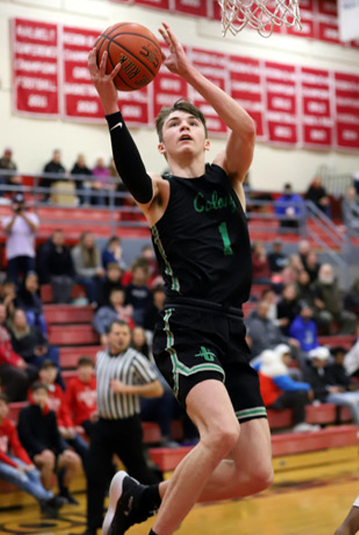 Patrick McMahon is a 6’6” junior guard and captain for the 4A Colony Knights from Palmer, Alaska. Colony is one of the top 5 teams in Alaska this season with a 8-4 record so far. This  junior hoopster carries a 3.5 GPA and is interested in aviation, which is huge in Alaska. Patrick already flies around the court! This season, he has been named MVP of the Doc Larson Roundball tourney in Wasilla, Alaska. He also went on an unofficial visit to the University of New Orleans in October.

Patrick has an older brother who played D2 basketball at the University of Alaska Anchorage and is currently playing at The Kings University in Edmonton Alberta Canada. His parents are both principals at Colony Middle School and Colony High School in Palmer. In the fall Patrick coached middle school 6th grade basketball along with his high school teammates. He has a goal to play college basketball and keep improving his skills. He averages 24 points, 2 assists and 9 rebounds a game for the Knights. Patrick played for the AAU D1 Nation Alaska Ambassadors, which travel to play out of state competition. With them they won several tournaments.

Colony High, won the Alaska Airlines Classic tourney last year against Lower 48 competition, and McMahon was named MVP. Colony hopes to return to the 4A Alaska State Championships in March with Patrick workin hard and helping lead his team. This young man has shown great growth in his abilities the past couple of seasons and can dominate a game. Patrick is known for his slam dunks which fire up the crowds and his team, and likewise he can hit a 3 pointer with the best. 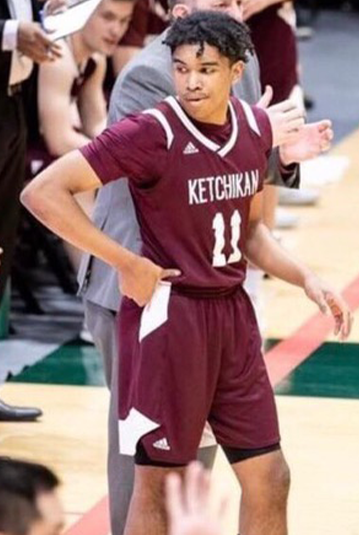 Chris Lee is a 6’1” senior guard and captain of the 4A Ketchikan Kings from Ketchikan, Alaska. Ketchikan is the defending 4A Alaska State champions. Chris has started for his team all 4 years. This season, Lee is leading the Kings with 26 points, 4 assists and 15 rebounds per game. He has scored a high of 47 points in a game this season and he is rapidly closing in on becoming the 3rd all time leading scorer in Ketchikan High School history (who currently is his brother Marcus, who graduated last year). With over half the season yet to go, he most likely will become the 2nd leading scorer in their history.

Chris was named to the All-Tournament team at 4A State Championships last year. He has been the MVP of several tournaments and  he has shown great skill, sportsmanship and leadership throughout his high school career. He was nominated this year as a McDonald’s All American. Last year, along with his brother, Marcus they brought the 4A state title back to Ketchikan for the first time in over 40 years.

He participates in summer basketball camps and programs. He coaches, refs and mentors  at elementary school skills camps. He played with the Alaska BluGold summer hoops program which travels to the Lower 48. He helps his high school rotary program bringing meals to the needy and homeless in his hometown. Lee sports a 3.0 GPA and hopes to further his college education in the field of psychology and go on to play D1 or D2 basketball.

With his Ketchikan Kings basketball team at 8-5 this year, he is hoping to return to the state tournament to defend  the title that he was key to winning last season. Chris makes things happen on the hardwood, and thats good for his team & supporters. 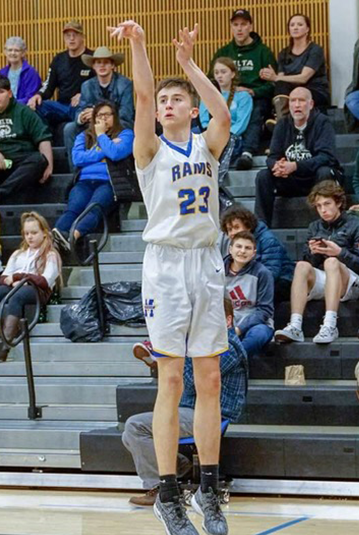 Quinn McHenry is a 6’5” junior Forward for the 3A Monroe Catholic Rams of Fairbanks, Alaska. Coming from a family where both parents were ex D2 college players and high school coaches, one can see where Quinn gets his skills and love of sports. Quinn has started for the  Rams the last two seasons, and was the 6th man in his freshman year. He is a team captain, averaging 12 points and 8 rebounds a game so far this season. In his best game this season McHenry had 6 threes and 15 boards. Yes, the big guy hits 3s, its a favorite shot of his and the crowds.

He was named to the 3A Alaska All State Tournament team last season, and the USA Today State by State All American list. This season he was named MVP of his school’s Mt. McKinley Bank Holiday Tournament. He represents his school and community well. This determined and dedicated athlete proves his abilities and is recognized for them by others.

Quinn is an excellent student with a 3.9 GPA and is a member of the National Honor Society. His team this season so far is the top ranked 3A team in the state of Alaska with a 12-4 record. The Monroe  Rams are a consistent participant in 3A State tournaments over the last decade. Quinn plays for Alaska BluGolds, a summer travel team that plays Lower 48 competition. He also participates in summer hoop camps and was named to the all star team for last two years at the Alaska Basketball Academy camp. With his leadership and skills, look for him to continue with his hoop goals and interests in sports medicine and business. 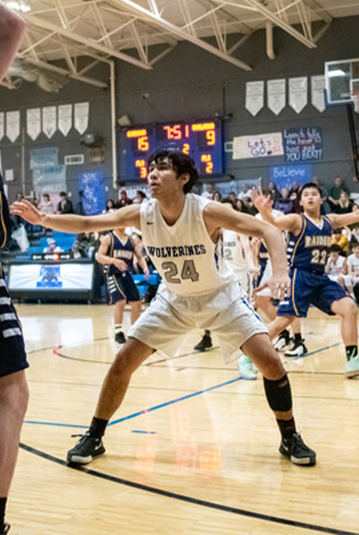 Christian Adams a 6’3” senior point guard at 2A Cordova High Wolverines in Cordova, Alaska.  Adams has been on 2A All state team  since his freshman year for Alaska Schools Activities Association or Alaska Association of Basketball Coaches. He also has been the MVP of The Alaska Annual Rally the Regions tourney 2 years in a row.

Adams is of Tlingit (Alaskan Native American) and Polynesian (Samoan/Tuvaluan) ethnicity. Originally  from Yakutat, Alaska, the family moved to Cordova a the end of his 8th grade school year.  His father, Bert Adams is the high school coach there. As a son of a basketball coach, he was virtually raised in the gym. His younger brother also plays for the varsity team. With a GPA of 3.8, Christian excels in the classroom as well as on the court.

Christian led his team in scoring, assists  and rebounds in his freshman, sophomore and junior seasons. This current season he leads his team again with 19.5 PPG, 6.5 assists and 7.6 rebounds. His team is currently 10-2 on the season.

Christian is also active in his community working with youth K-8 basketball clinics, officiating youth games and also being involved in various Alaskan Native American tribal camps and activities throughout the state of Alaska. Christian does Culture Camp volunteer work at the Knik Tribe in Palmer taking pride in his Alaskan Native culture. He also helps with his family subsistence fishing operations  during summers. Chris works hard on and off the court!